SEATTLE, April 24, 2017 /PRNewswire/ — PicoBrew, manufacturer of the world’s first line of automatic, craft beer brewing appliances, today announced new partnerships with local Seattle, WA craft beer breweries Fremont Brewing and Stoup Brewing, as well as Wicks Brewing of Riverside, CA, Freetail Brewing Co. in San Antonio, TX, and Still Hill Brewery from Rocky Hill, CT to create PicoPaks, adding to its more than 160 brewery partners from around the world. To celebrate these new partnerships and the Pico Model C Kickstarter success—the 5th most successful Food Kickstarter of all time, raising more than $1.35M in just three weeks—PicoBrew has also committed to rewarding all Kickstarter backers who buy a Pico Model C by April 30, 2017 with a free Fremont Brewing Summer Ale PicoPak from one of the fastest growing breweries in Washington State. 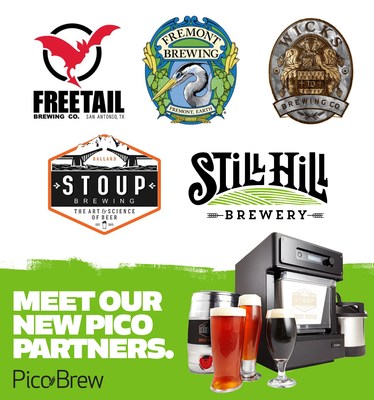 «We’ve always enjoyed outstanding beers from Fremont, Stoup, Wicks and Still Hill,» said Dr. Bill Mitchell, PicoBrew’s CEO, «and it’s exciting that now our customers will be able to brew them at home on Pico. These top craft beer breweries join the Pico Brewers Network at a time when our platform appears to be gaining considerable momentum, following the addition of recently announced award-winning brewing partners in Colorado like Upslope Brewing, and still more partners in California like Mike Hess Brewing.»

«We’re excited to be able to share our award-winning beers on Pico with customers worldwide,» said Matt Lincecum, founder of Fremont Brewing.

Fremont Brewing (Seattle, WA), which was founded by Matt Lincecum in 2009, has been exploding in popularity inside of Washington and now on the West Coast, with popular beers such as Summer Ale, Interurban IPA, The Sister and The Brother, both Imperial IPAs, and more. Fremont Brewing plans to bring one of their most popular beers, Fremont Summer Ale, to the new Pico® platform as a PicoPak so that customers from around the world may enjoy Summer Ale fresh on tap in their own homes, anytime.

Stoup Brewing (Seattle, WA) is where craftsmanship is a testament to their commitment to the art and the science of beer. Their first choice for a PicoPak is their award-winning Robust Porter. The beer has hints of dark chocolate, roasted coffee and a light malty sweetness, the result of a complex malt profile, including chocolate malt, roasted barley, roasted wheat and roasted rye.

Wicks Brewing’s (Riverside, CA) first PicoPak will be the Paladin Pale Ale. Paladin is a liberally hopped pale ale that brought home bronze at the World Beer Cup in 2016, and back-to-back gold at the 2015 and 2016 Los Angeles International Beer Competitions. Copious amounts of Citra and Cascade hops impart layers of tropical fruit notes and grapefruit aromatics in this brew.

All Kickstarter customers who pledge for the new Pico Model C by April 30th will receive a free Fremont Summer Ale PicoPak, in addition to the following previously announced «Stretch Goals»:

Additional incentives will be announced throughout the campaign.

In honor of this recently announced partnership with Fremont Brewing and the Spring Backer Reward, PicoBrew will hold a special event on Wednesday, April 26th starting at 5 p.m. PDT at Fremont Brewing in Seattle to allow customers to enjoy some Summer Ale while they check out the new Pico Model C and PicoStill that are the focus of PicoBrew’s current KickStarter Campaign. Those attending will also be eligible to receive custom pint glasses, T-shirts, tasting paddles or other promotional items and can enter to win a Pico stainless steel model giveaway. For those who can’t join in the fun locally, the PicoBrew team will also host a Kickstarter Live broadcast from the event at 7 p.m. PDT.

PicoBrew hosts fan events all across the country throughout the year, celebrating its local brewery partners.  To stay current on all events, sign up for the PicoBrew e-newsletter at PicoBrew.com.

For a list of current PicoBrew brewery partners from around the world, visit the BrewMarketplace and select «Breweries.»  Select «PicoPaks» to view the most current PicoPaks available for purchase. Breweries interested in joining the Pico program, can learn more here.

Pico Model C is the new, easier-to-use countertop Pico model that uses the same innovative technology as the earlier stainless steel Pico to brew fresh craft beer automatically in about two hours. It has a sleek, black powder-coated exterior and high-contrast two-line OLED display. It also includes the new Pico C Brew Keg, which features a simplified hose connection and is dishwasher-safe for easy cleanup. Pico Model C will retail for $549 when it hits stores in fall of 2017 and will include the brewing appliance, Pico C Brewing Keg and 5L serving keg. PicoPaks and the CO2 carbonation kit will be sold separately. The Pico Model C Kickstarter campaign offers early backers a chance to purchase the new model at prices starting at just $329.

About PicoBrew
PicoBrew was founded in Seattle in 2010 by brothers Bill and Jim Mitchell, a former Microsoft executive and food scientist, along with engineer Avi Geiger.  Combining their food science and technology expertise with their passion for homebrewing, they set out to improve the craft beer brewing process for small producers and homebrewers. PicoBrew introduced its flagship product, the award-winning Zymatic® automatic beer-brewing appliance for beer brewing professionals and homebrewers, in 2013. The Pico™, designed for consumer craft beer enthusiasts, followed in 2016. Both machines are designed to improve the precision, repeatability and overall quality of the brewing process to create consistently delicious craft beer. For more information, visit www.picobrew.com or follow PicoBrew on Facebook, Twitter or Instagram.

To view the original version on PR Newswire, visit:http://www.prnewswire.com/news-releases/picobrew-promises-free-beer-from-fremont-brewing-to-all-backers-who-buy-a-pico-model-c-craft-beer-brewing-appliance-on-kickstarter-by-april-30th-300444688.html