SEATTLE, April 3, 2017 /PRNewswire/ — PicoBrew, manufacturer of the world’s first line of automatic craft beer brewing appliances, today announced the newest addition to its consumer product family, the Pico Model C, and a Kickstarter campaign to help fund initial production. The Pico Model C Kickstarter campaign offers early backers a chance to purchase the new model at prices starting at just $279USD. Pico Model C builds on the technology and market success of the all-stainless Pico Model S launched into the channel late last year for an MSRP of $799, but makes brewing your own fresh craft beer even more affordable, simple and fun. 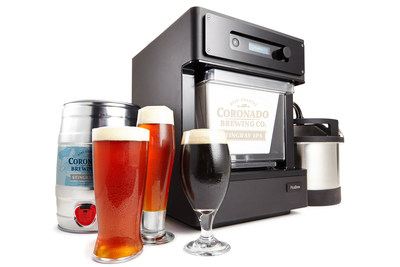 «We’ve spent a significant amount of time listening to our customers who were early adopters of the initial Pico to identify areas where we could streamline and simplify the use of the appliance even further,» said Dr. Bill Mitchell, CEO, PicoBrew. «By making improvements to our hardware with a sleeker design and easier-to-use and clean brewing keg, and by offering a more accessible price point, brewing fresh craft beer at home can be a reality for an even larger number of craft beer enthusiasts. We are excited to offer incentives through our Kickstarter campaign that will allow the earliest backers to secure their own Pico Model C for more than 50% off the retail price, with plenty of other enticing add-ons to choose from.»

Pico Model C will retail for $549USD when it hits stores in fall 2017 and will include the brewing appliance, Pico C Brewing Keg and 5L serving keg. PicoPaks and CO2 carbonation kit will be sold separately.

The Kickstarter campaign will run through May 12th with a goal of raising $350,000 for production. An initial offering of 500 Pico Model C units is available for backers who pledge $279 or more, and backers can also opt for add-on incentives like additional kegs and special PicoPaks. Additional incentives will be announced throughout the campaign. For the latest updates, visit www.picobrew.com to sign up for the Kickstarter campaign e-newsletter.

Coincident with the launch of their new appliance, PicoBrew also announced two other supporting products.

BrewUnlimited is a new PicoPak subscription service that allows customers to brew as many PicoPaks as they want for just $59 per month, including shipping. Customers are limited to two unbrewed PicoPaks at any time during their subscription, but as soon as they brew may reorder any PicoPak including the new design-them-yourself FreeStyle PicoPaks. As a limited-time Kickstarter incentive, customers get two months of BrewUnlimited for just $100.

BrewPulse is a new mobile application that serves to help manage and control your craft beer life. Purchase PicoPaks through the BrewMarketplace, monitor the progress of your brewing cycle in real-time, and now track fermentation and carbonation progress to achieve your finished beer. The app will be free for download and available for iOS and Android coincident with Pico Model C shipping and compatible with the original Pico Model S as well.

For more information about Pico Model C and the Kickstarter campaign, visit: www.picobrew.com/kickstarter.

About PicoBrew
PicoBrew was founded in Seattle in 2010 by brothers Bill and Jim Mitchell, a former Microsoft executive and food scientist, along with engineer Avi Geiger. Combining their food science and technology expertise with their passion for homebrewing, they set out to improve the craft beer brewing process for small producers and homebrewers. PicoBrew introduced its flagship product, the award-winning Zymatic® automatic beer-brewing appliance for beer brewing professionals and homebrewers, in 2013. The Pico™, designed for consumer craft beer enthusiasts, followed in 2016. Both machines are designed to improve the precision, repeatability and overall quality of the brewing process to create consistently delicious craft beer. For more information, visit www.picobrew.com or follow PicoBrew on Facebook, Twitter or Instagram.

To view the original version on PR Newswire, visit:http://www.prnewswire.com/news-releases/picobrew-debuts-the-next-generation-of-craft-beer-brewing-appliances-pico-model-c-300433304.html