Museum of Glass Presents Richard Marquis: Keepers, a Late-Career Survey of this Towering Figure in the Studio Glass Movement

TACOMA, Wash., Sept. 13, 2019 /PRNewswire/ — On September 28, 2019 Museum of Glass will open Richard Marquis: Keepers, a late-career survey of this towering figure in the Studio Glass movement. Organized by Museum of Glass in partnership with the Wichita Art Museum and guest curated by Seattle-based curator Vicki Halper, this retrospective of Richard (Dick) Marquis’s work includes objects that have rarely been exhibited, such as ceramics and prints. 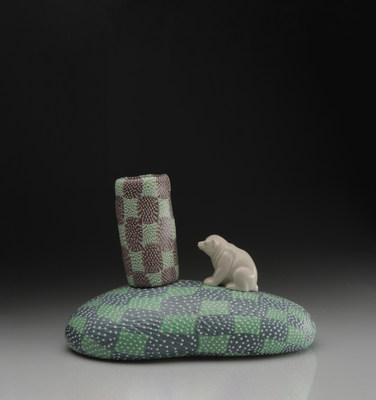 Known for his obsessive technique, deep respect for history, and irreverent use of his skills, such as mixing knickknacks with highly crafted objects, Marquis is celebrated as one of the most influential artists of the Studio Glass movement.

«It’s one thing to be incredibly skilled and have an eye for details, but it’s what Dick does with the work after it comes off the pipe that brings humor and context to it,» said Benjamin Cobb, Hot Shop Director at Museum of Glass. «His ability to create work that pulls the viewer away from the overwhelming mastery of technique is something I’ve always found astounding.»

Drawing on his background in both ceramics and glass, Marquis adopted a derisive attitude towards these mediums that was tempered by technical skill and an established vocabulary of forms—the cup and teapot among them. Marquis has been a lifelong collector of mostly odd objects. Among them are bowling balls, tin coffeepots, anvils, bunches of glass grapes, and ceramic dogs. He has also collected his own work beginning in the 1960s. These «keepers» are the objects he treasures the most and form the basis of the Museum’s exhibition.

Echoing his far-reaching influence, the exhibition is accompanied by a fully-illustrated catalog with writings by art historians, curators, colleagues, and family and friends of the artist, including: Lino Tagliapetra, Tina Oldknow, Fritz Dreisbach, and Benjamin Cobb.

Richard Marquis is a pioneer of the Studio Glass movement known for creating whimsical and irreverent glass and mixed media sculptures. In the late 1960’s Marquis traveled to Murano, Italy on a Fulbright Scholarship to work at the Venini Factory. It was there where he saw long-held Venetian glassblowing techniques being used, such as murrine among others. Since that time he has used these historical techniques to expand his sculptural vocabulary, building upon classical references to create the humorous, colorful, and sophisticated work for which he has become widely recognized for.

About Museum of Glass
Located in Tacoma, Washington, Museum of Glass is a premier contemporary art museum dedicated to glass and glassmaking in the West Coast’s largest and most active museum glass studio. Opened in 2002, the Museum has established a reputation for hosting impactful and engaging artist residencies, organizing nationally traveling exhibitions, and creating unique programs for visitors while building a growing permanent collection chronicling the development of modern and contemporary glass. Museum of Glass provides an environment for artists and the public to ignite creativity, fuel discovery, and enrich their lives through glass and glassmaking. Museum of Glass is a non-profit organization sponsored in part by the City of Tacoma Arts Commission, ArtsFund, Dimmer Family Foundation, and Anonymous Donors.